We’re getting noticed! In the past few weeks, Point West has received 3 national awards in recognition of its community development efforts. Each one is a reflection of the incredible work the Point West team and YOU, our fantastic members, do each and every day to bring inclusion, equity and empowerment to our local community. As a cooperative, none of this is possible without you. Thank you for your continued support of your credit union, and read on to learn more about each of the awards.

CU Hero of the Year Each year, Credit Union Magazine honors some of the credit union movement’s heroes—those individuals who relentlessly promote credit union philosophy, dedicate themselves to credit union principles, and make a difference in their communities. We’re excited to announce that our own CEO, Amy Nelson has been chosen as a finalist this year! As Amy would say, this is not an award for her, but for the tireless work of our team and members to make a difference in our community. We hope you’ll support Amy and Point West by voting between now and April 15 – click here to cast your vote. 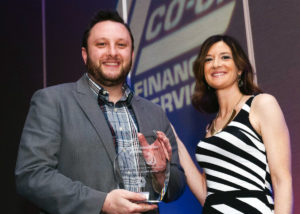 On Tuesday, Feb. 28, Point West was honored during the Credit Union National Association’s Governmental Affairs Conference at the CU Times’ 12th Annual Trailblazer Awards. The credit union received its award for “Outstanding Service to the Underserved,” in recognition of its outreach to non-citizens and low-income community members. Point West recently received its Juntos Avanzamos designation from the National Federation of Community Development Credit Unions for its support of the Latino community in the Portland metro area, and in January, cemented a partnership with the Mexican Consulate of Portland to provide education and outreach to the consulates clients. For more information, check out the article the CU Times posted on Point West late last month.